The area of Katihar was tossed between Hindu kings & Muslim Nawabs. So their sign could be seen even now clearly. As it contains many industries people come from UP and across Katihar in search of Job. As it was partitioned from Bengal presence of Bengali Hindus is more here. Every year during Navratri season they celebrate it in a very majestic way which represents their tradition. We can also see huge number of Marwari and Sikh people here. 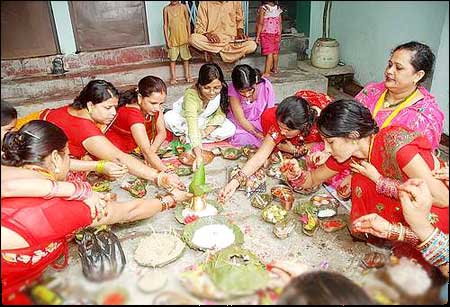 The cloth of Katihar reflects the Indian social macrocosm. Majorities of the people of Katihar are Hindus and a minority practices Islam and there is a considerable number of Christians, area specific to the tribal belt. For the most part, Katihar is a feudal society that still perseveres with traditional social biases that lead to class and caste conflicts. Katihar is a place which has rich culture heritage and follows even till today. Traditional festivals are celebrated with fervor and geity. Some important festivals celebrates are Chatth Puja, Makar-Sankranti, Ram Navami, Teej, Eid and more. Though Angika is a local medium of communication in Katihar yet others like Surjapuri language and Maithili is also spoken in the region.


Arts and Crafts of Katihar

Mithila painting which though is a regional painting of Darbhanga is quite popular in this region of Bihar also. People of Katihar paints walls of their houses with the art form in which crushed rice is coloured and is stuck. The painting mostly done by women folk are done during festive season or on the eve of any auspicious occasion like wedding. Depiction of nature and scene from ancient epics like Ramayana is very common. Natural objects like the sun, the moon, and religious plants like tulsi are also widely painted, along with scenes from the royal court and social events like weddings.

Katihar has contributed to the Hindustani classical music. Various dance forms of Bihar like Jhumarnach,Jata jatin, Londnach, Dhobi nauch along with many other are quite popular in this region of Bihar. Folk sings like Phagul, and many others are sung by women in groups with musical instruments like Dholak, Tabla, and Harmonium etc. Till date many acclaimed regional and national artists have performed in Katihar giving wide exposure to this part of Bihar.