Katihar with a coverage area of 3,056 km2 lies 24 meters above sea level. With the location of 25.53°N 87.58°E it forms North Eastern Part of Bihar State. From Katihar town Bangladesh is around 80 Km east & Nepal lies at 100km north. It is surrounded by Purnea district (Bihar) in the north and the west, Malda district and Uttar Dinajpur district (Paschim Bengal) in the east, Bhagalpur district (Bihar) and Sahebganj district (Jharkhand) in the south and occupies an area of 3,056 square kilometres. 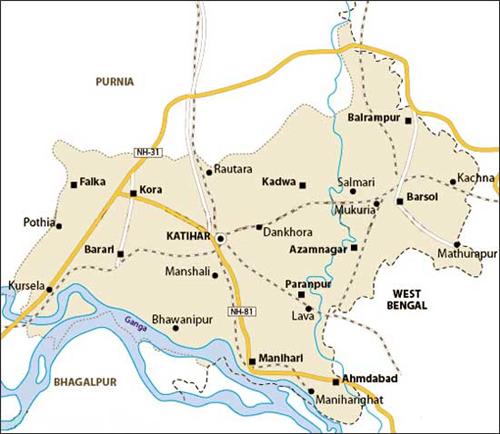 People living in Katihar experience a subtropical climate under moist conditions for most part of the year. The winters are cold and dry beginning from December to February. The city receives a standard annual rainfall of 896.2 mm with the temperatures in winter anywhere between 0–27 °C. Summers are hot and humid and temperature soars upto 35–40 °C . Ho wind commonly referred as loo is common during summer seasons. It receives average rainfall.

River Ganges, Kosi, Mahananda and Righa are the main rivers in the region. Mighty Ganga flows at about 25 kilometres from Katihar town, while Kosi i.e., western boundary lies 30 kilometres from Katihar town and beautiful Mahananda besides many other small rivers. The Kosi merges with Ganga at the south-west boundary of Katihar District. Katihar shares boundary with two states i.e. Jharkhand at the southern side and West Bengal at the eastern side. Its closeness to the Himalayas in the north, Jharkhand plateau in the south and a multiple of rivers combine with excellent rainfall gives it a different climate which can be termed more or less pleasant during most of the year.

According to the 2011 census while Katihar city had a population of about 240,565, Katihar district with a population of 3,068,149 ranked 117th in India in terms of population growth. The district has a population density of 1,004 populations per square kilometre (2,600/sq min). Katihar has a sex ratio of 916 females for every 1000 males, and a literacy rate of 53.56%. Katihar has handsome population of Muslims who also form majority in many areas.

Geographical location of Katihar is blessing as the land is fertile for the growth of many agricultural products. Today Katihar is a major producer of wheat in the region. Further in recent years the cultivation of cash crops like sugarcane too had gained popularity. People are also engaged in fishing businesses which in turn is contributing in the economy of the region.